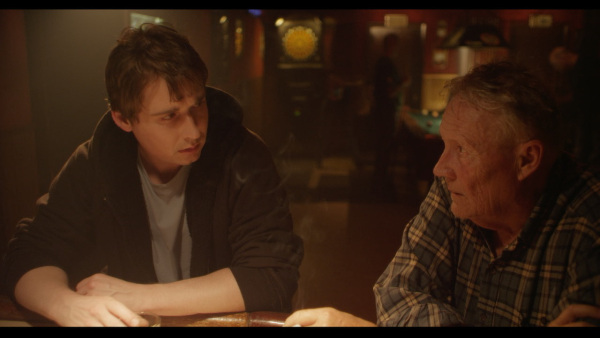 From the Huntingdon Valley Midweek Wire:

That’s where Apparition, a psychological thriller filmed in Hatboro, Horsham and surrounding areas, takes off. 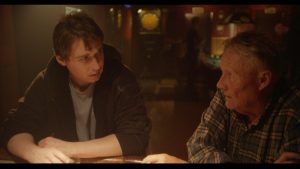 PHOTO COURTESY OF ALEX RODEMICH Jody Quigley (Left) and Thomas Roy film a scene in for Apparition in Strokers Roadhouse in Hatboro.

Doug (Jody Quigley) and Lori (Katrina Law) are set to get moving on renovations of their 300-year-old Pennsylvania farmhouse after their engagement party, but Lori never makes it home. She’s killed in a car accident, leaving Doug to navigate a sea of grief and memories that never were. All the while, he remains living alone in their house, which he quickly learns has a history of darkness.

“It’s not one of those blood and gore movies,” said Guy Quigley, co-producer and owner of ThunderSmoke Media in Doylestown. “The house is mentally destroying him.”

The house looms over everything, almost like a character itself, one that’s played by a local landmark. The movie is filmed almost entirely at the Penrose Strawbridge House at Graeme Park in Horsham.

“Location always set the tone for the film. This mansion in particular helped us tell the story,” Lili Bordan said. “It becomes about the house because Doug let it become about the house.”

Bordan’s character, Jamie, is drawn into the middle of Doug’s mess. She meets him by happenstance just before Lori’s death, and after, acts as his confidant. The two develop an emotional connection and she, too, is exposed to the horror transpiring in the house as well as Doug’s unraveling psyche.

Bordan, a New York native and Los Angeles resident, emphasized the importance of the setting of this film to drive home its crux: “It’s the study of a man who has avoidance issues that he’s not strong enough to deal with.”

Hatboro serves as the backdrop for some pivotal scenes, too. Doug meets Woody (Thomas Roy), an old man and longtime local of the town. He warns Doug several times about the danger of the house. 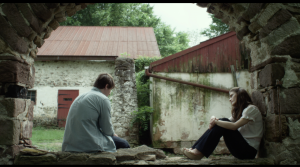 PHOTO COURTESY OF LILI BORDAN Jody Quigley and Lili Bordan film a scene on the property of the Penrose Strawbridge House in Horsham.

Two of these meetings take place in present-day Hatboro businesses. In the first, Woody runs into Doug in Village Hardware Store on South York Road. In the second, the two have a drink at the Stroker Roadhouse on Jacksonville Road. These locations are less important to the plot than the Penrose Strawbridge House, but their appearance matches the film’s visual aesthetic perfectly. Main Street even makes an appearance toward the end of the film.

The placement of Hatboro held extra significance for Roy—he grew up there and was a 1962 graduate of Upper Moreland High School.

“We filmed in a bar that my dad used to drink in, on a street that was part of my paper route and three blocks away from the elementary school that my mom used to teach at,” he said. “It was weird, I’d be inside at the bar with Jody, talking about ghosts and then I’d stand outside and look at all these houses and remember where I served the paper.”

Now, he lives in Lebanon, Pennsylvania. Through the years, he’s worked away from home in the Navy, as a teacher, for a radio station and at various capacities for the Pennsylvania Renaissance Faire. He got serious about acting later in life and even landed a role in the Bruce Willis and Brad Pitt film Twelve Monkeys. Despite all of that, the homecoming was sweet.

“It was thrilling to be back there. Everybody that I ran into was gracious, happy, helpful,” Roy said. “I thought, ‘I’m so glad I’m from this town.’ ”

While many of the scenes are placed there, Hatboro is not mentioned in the movie. Rather, it serves as a platform for the sometimes sad, sometimes suspenseful and always intense Apparition.

The movie has been garnering positive reviews both on Amazon and iTunes, but has yet to hit Redbox or major markets like Walmart. But it’s not produced on a shoestring budget and it’s certainly not without depth or frightening moments.

PHOTO COURTESY OF ALEX RODEMICH Another photo taken during the production of Apparition.

Director Quinn Saunders (Big Brother, Cherry.) paces the film from a tender beginning to a relentless and unforgiving end, which finally culminates with a mental break, leaving audiences wondering if any of it ever happened.

Locals can catch it screened for the first time on June 14 at The County Theater in Doylestown. An afterparty will be held with producers from ThunderSmoke and Futurist Ape, members of the cast and friends at The Hattery at the Historic Doylestown Inn.

“We try to keep the audience at bay, to get them wondering what is going to happen next,” Guy Quigley said. “It plays really well.”

To buy tickets for the screening, visit www.countytheater.org/films/apparition. For information and updates, visit the Facebook page.